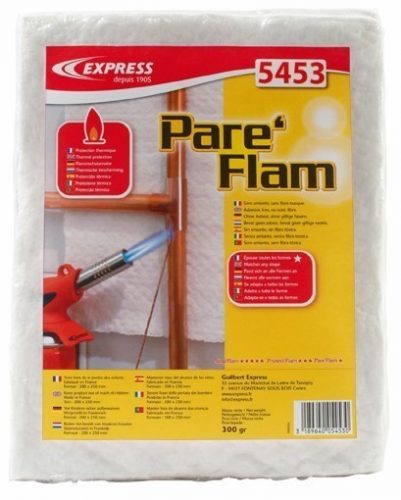 Welding and soldering work involves producing high temperatures that are rarely suitable for the environment of the pipes and metal parts involved. When you work, for example, in plumbing, it is advisable to apply foolproof protection to the walls behind the pipes to be welded as well as on the ground. Guilbert Express has developed a flameproof thermal protection system which allows work to be carried out with complete peace of mind, without fear of damaging the elements surrounding the components to be welded.

The forerunner of the flame-retardant thermal protection

The development of flame-retardant thermal protection is the result of extensive research work, because it was necessary to rule out certain harmful or unsuitable materials.

Long used for its high insulation and thermal protection capacities, asbestos was totally banned from the components used, long after its harmfulness was proven. On the other hand, other materials were used, but they did not stand up well over time and became brittle and crumbly. The protections were effective, but could not be reused.

The dangers of asbestos have been suspected for a very long time. As early as 1906, fibrosis was discovered among workers in the spinning mills. In 1977, all varieties of asbestos were classified by the IARC (International Agency for Research on Cancer) as a carcinogenic substance. However, it is only since1 January 1997 that its use has been definitively banned in France by decree n° 96-1133 of 24 December 1996 relating to the prohibition of asbestos, issued in application of the Labour Code and the Consumer Code.

The research and development department at Guilbert Express has developed thermal protection that meets safety requirements and complies with all standards. Their protective capacity is impeccable, even at very high temperatures, and they contain no asbestos or other toxic fibres.

Emphasis has also been placed on the durability of the protections. They can be reused many times without losing their effectiveness. The flexibility of the materials that it is made of is not affected by high temperatures. Once your job is finished, the protection can be folded up without being damaged, and put away until the next job.

Whichever reference you choose, it guarantees excellent heat resistance without becoming brittle or crumbly. This allows it to be folded for storage without the risk of damage.

Both very flexible and very resistant, Stop ‘Flam is composed of a woven envelope of pure silica, needled fiberglass and woven fiberglass. It contains 96% silica and is guaranteed ceramic free.

Stop’ Flam 5451 is made of long interwoven and stitched silica fibers. It is an embossed aluminium sheet. Its thickness is 10 mm.

The two references 5453 and 5459 are made of needled fiberglass.