What is the difference between brazing and welding?

Soldering and welding are two different techniques. In the first case, you have to bring a third element, i.e. another filler metal that will make the joint, while in the second case, the two pieces are sufficient because they will blend together. The differences between these two methods are detailed below.

When you weld between two pieces of metal, by melting under heat, they create atomic bonds between them that allow them to bond perfectly.

When you braze, the two pieces of metal don’t create atomic bonds, so you have to bring in another metal to make the junction between the two.

Each technique has its advantages and disadvantages. The weld produces a thick and irregular bead at the joint, which is unsightly. If this weld is apparent, you will have to spend time on the finishes to make it as inconspicuous as possible.

A brazed joint, on the other hand, is completely smooth, which guarantees a natural finish that is much more aesthetic (and economical, since you don’t have to spend time on it).

Welding consists of fusing the two parts together. To do this, they must be brought to a temperature high enough for them to melt. The heat you bring is concentrated directly on the area to be welded. Its temperature corresponds to the melting point of the materials to be bonded.

The result of a weld is extreme solidity, which is why it can be used for major works, in construction,  railroads, pipelines, etc..

As brazing does not involve melting the metals to be soldered, but rather the low melting point filler metal, it requires 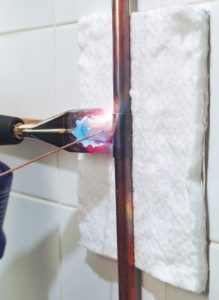 lower temperatures than soldering. This saves energy on the way, when carrying out large-scale work. Brazing is very convenient because you don’t have to worry about the difference in melting point temperature between the two parts.

To use this technique, you first heat the two parts to be soldered and then bring your filler metal to melt on contact with them (not under the heat of the flame of your soldering iron). As it softens, the filler metal diffuses by capillary action. When cooling, the two parts become inseparable.

You can use tin – possibly combined with nickel – as a filler metal. Lead used to be applied a lot in the past, but its use has been restricted and even banned from all drinking water pipes because it releases particles that are highly toxic to our bodies.

Brazing applies to all kinds of metals, such as copper or steel, as well as non-metallic components, such as graphite, alumina, tungsten carbide and even diamond. It is generally reserved for finer work than welding : electricity, electronic components, aerospace, heating, air conditioning, automotive, etc.

Brazing preserves the physical properties of metals, as they are not themselves melted down. It also prevents all risks of metal deformation (known as warping).